In my paranormal suspense novel, A Human Element, we’re faced with the question: Is there life out there? And if there is, will it be hostile or welcoming?

The theoretical physicist and cosmologist Stephen Hawking says he is nearly certain that alien life exists in other parts of the universe. He also says that humans should avoid contact with alien life forms. “If aliens visit us, the outcome would be much as when Columbus landed in America, which didn’t turn out well for the Native Americans,” he said.

I like to imagine that there are intelligent worlds out there, perhaps some would be hostile and some would not. This is the undercurrent of A Human Element.

In 1961 US radio astronomer Frank Drake developed an equation to help estimate the number of planets hosting intelligent life in the galaxy. He estimated 10,000. A lot, right? In 2001 more rigorous calculations connected to the 1960s “Drake equation” suggests that our galaxy may contain hundreds of thousands of life-bearing planets. Just imagine.

The movie Contact, based on a novel written by astronomer Carl Sagan, raises the debate too about whether life is out there.

I saw Sagan speak back in 1995. His goal was to educate the world on the infinite wonders and discoveries to be found in space. He died the next year but I think he attained his goal, and forever leaves his imprint on not only how we look at the stars – but how we should dream about what’s amongst them. At one point in Contact, Dr. Arroway says: “The universe is a pretty big place. It’s bigger than anything anyone has ever dreamed of before. So if it’s just us… seems like an awful waste of space. Right?”

I believe that too. And we should dream about what’s beyond our world, as Sagan inspired us to do.

In writing my thriller, A Human Element, I enjoyed exploring the idea of another world so much that I went on to write a middle grade book adventure fantasy. And where is the book set? On another world of course! I like to imagine other worlds out there.
What do you believe and imagine?

About A Human Element:

One by one, Laura Armstrong’s friends and adoptive family members are being murdered, and despite her unique healing powers, she can do nothing to stop it. The savage killer haunts her dreams, tormenting her with the promise that she is next. Determined to find the killer, she follows her visions to the site of a crashed meteorite–her hometown. There, she meets Ben Fieldstone, who seeks answers about his parents’ death the night the meteorite struck. In a race to stop a mad man, they unravel a frightening secret that binds them together. But the killer’s desire to destroy Laura face-to-face leads to a showdown that puts Laura and Ben’s emotional relationship and Laura’s pure spirit to the test. With the killer closing in, Laura discovers her destiny is linked to his and she has two choices–redeem him or kill him.
Praise for A Human Element:

Praise for A Hidden Element:

“Fascinating…a haunting story about just how far parents will go to protect, or destroy, their children in the name of love.”—Rebecca Cantrell, New York Times best-selling author 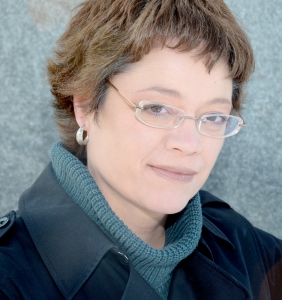 Donna Galanti is the author of the paranormal suspense Element Trilogy and the children’s fantasy adventure Joshua and The Lightning Road series. Donna is a contributing editor for International Thriller Writers the Big Thrill magazine and blogs with other middle grade authors at Project Middle Grade Mayhem. She’s lived from England as a child, to Hawaii as a U.S. Navy photographer. Donna enjoys teaching at conferences on the writing craft and marketing and also presenting as a guest author at elementary and middle schools. Visit her at Elementtriology and her Website.

She also loves building writer community. See how at Your Awesome Author Life.

Connect with Donna on social media:

4 thoughts on “Is There Life Out There? By Donna Galanti”