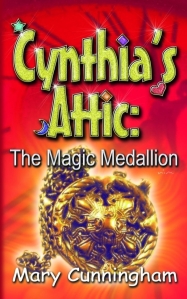 A magic trunk sweeps Cynthia, and best friend, Augusta Lee (Gus), back to 1914 where an ill-fated trip to the circus leads to Blackie, a sinister hobo clown. Before they can be forced by Blackie to become permanent clown troupe performers, the girls are rescued by Gabriella, a Gypsy fortune-teller, and are entangled in the theft of her family’s treasure. Much to their dismay, Cynthia and Gus appear to be the family’s only hope of recovering a precious magic medallion.

Traveling unexpectedly forward to 1934, they meet a ‘very familiar-looking’ cave guide, and are stalked by a stranger on a black horse. Dangers escalate, as they’re swept into an underground river, and later, barely avoid becoming ‘campfire marshmallows’ in a raging forest fire.

Friendship, loyalty, and an undeniable sense of adventure, keep this twosome on a never-ending path of danger, suspense, and merriment.

The Curse of the Bayou

The Legend of Lupin Woods